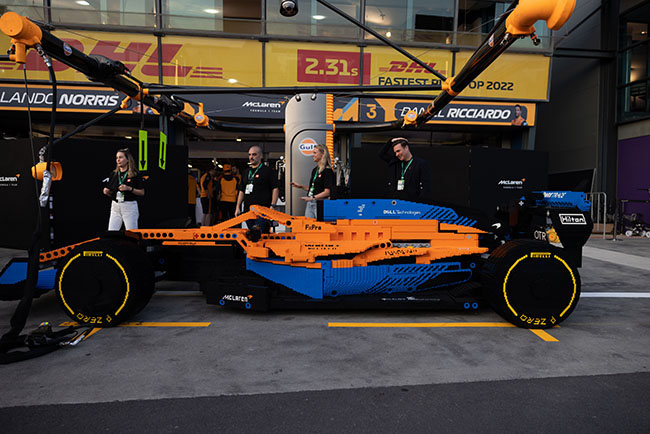 You won't believe this epic life-size race car made out of nearly 300,000 LEGO bricks!

LEGO® Australia and McLaren Racing have teamed up to create a life-size build of the LEGO® Technic™ McLaren Formula 1™ Race Car.

Just like the real McLaren Formula 1 race car, the LEGO model has been designed to allow people to sit in it thanks to the removable halo and steering wheel.

The 5.7m long and 2.4m wide car contains 288,315 LEGO blocks and will be on display at this year’s 2022 Melbourne Grand Prix at Albert Park for fans to see and interact with. If you’re a Formula 1 fan, you’ll notice the incredible attention to detail in the car, such as the V6 cylinder engine with moving pistons, steering activated from the cockpit, suspension and a differential lock.

The car celebrates McLaren's 2021 season livery while giving fans a hands-on interpretation of the new 2022 F1 car design. LEGO plates have even been used on the model to recreate the logos as seen on the real McLaren Formula 1 race car. The car took 1,893 hours to construct with 27 people involved in the design and build including LEGO’s very own Ryan ‘The Brickman’ McNaught, Australia’s only LEGO Certified Professional who features on Channel 9’s LEGO Masters TV show.

Check out a time-lapse of the build here

The build is a first-of-its-kind official partnership that embodies McLaren’s signature engineering and LEGO Technic’s spirit.

"The partnership between the LEGO Group and McLaren continuously develops each time we get together for the next collaboration," said Niels Henrik Horsted, Head of Product, LEGO Technic. "We never stop trying to excite and inspire our fans by pushing the limits of possibility through the technology and designs produced, both on the racetrack and with LEGO building."

If you can't get hold of the LEGO Technic McLaren F1® set in stores you can backorder it from LEGO.com