DPIPWE’s Marine Conservation Program staff have successfully removed a fishing gaff lodged in the muzzle of an Australian fur seal.

The seal, a large adult male weighing about 200kg, was first spotted near Cape Hauy on Tuesday afternoon.

It was spotted again yesterday morning at a known seal haul-out at Munro Bight.

Marine Conservation Program staff and a wildlife ranger travelled to the site to determine if the hook could be removed safely.

“We could see the gaff hook attached to the seal’s muzzle; however the seal was settled and relaxed,” wildlife biologist Sam Thalmann said. 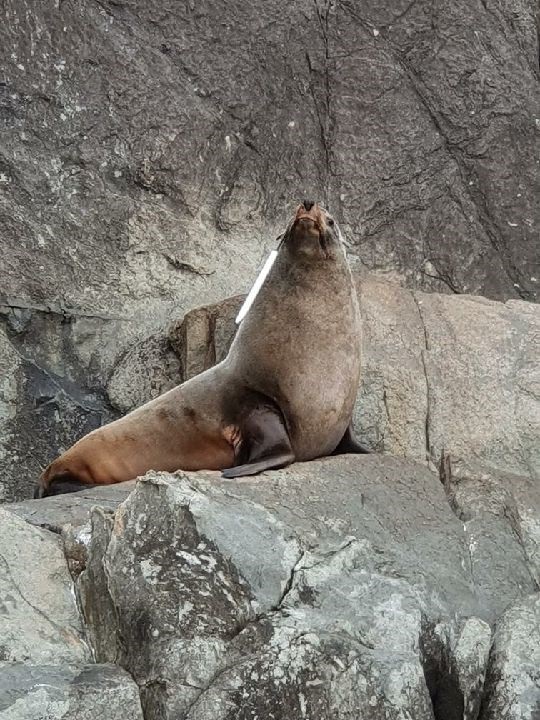 “Once sedated, our assessment showed the seal’s eye was intact and the penetration was superficial through the upper nose, so we were able to remove the hook. It’s tricky to sedate such a large seal so this was a great outcome for the seal and our marine conservation team."

“The seal was in good condition despite its injury and soon slipped back into the water and swam away."

"Seals are a wholly protected species and deliberate interference with protected species is illegal. Most fishers are aware that seals will follow a fish close to a boat and take the catch so we encourage all fishers to be responsible when fishing as well as when cleaning and disposing of fish waste and equipment,” Mr Thalmann said.

“Disposing of fish carcasses near boat ramps and inshore waters could encourage negative behaviours in wildlife which could become problematic. When a seal chooses to interact with fishing activities, fishers should also be mindful that the ocean is a seal’s habitat.”

DPIPWE is investigating the incident and anyone with information is asked to contact the Investigations and Enforcement Section on 0417 661 234 or Crime Stoppers on 1800 333 000.