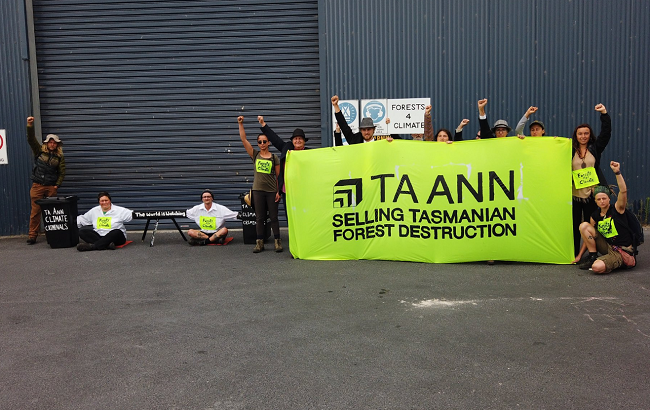 Four people have been arrested following a protest at the Ta Ann Veneer Mill at Smithton in the state's north-west.

Authorities were called to the scene at around 9 this morning where 20 Bob Brown Foundation activists were rallying.

Police say most complied with directions to move on, but four had attached themselves to machinery and refused to leave, leading to them being arrested for trespass.

"Ta Ann is a major driver of forest destruction in Tasmania and has an appalling reputation for logging, palm oil expansion & human rights abuses in Sarawak, Malaysia. A number of ancient forests in takayna/Tarkine are scheduled for logging to supply timber to Ta Ann," a Bob Brown Foundation statement on Twitter said.

“Tasmania Police appreciates that people have the democratic right to protest, however this sort of action diverts key resources away from other areas,” Senior Sergeant Tony Stewart said.

"The company continues to operate under the Market Compact with the state’s peakenvironmental non-government organisations (ENGOs) resulting from the 2012 Tasmanian Forest Agreement that it will only ever process logs from the agreed Permanent Timber Production Land," a statement said.